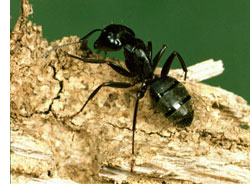 "I keep seeing big, black ants in my house, especially in the kitchen and bathroom. I spray the ones I see, but they keep coming back. What kind of ants are these, where do they come from, and how do I get rid of them?"

Carpenter ants vary in size and color but are usually large (1/4-1/2 inch) and blackish. Occasionally, swarms of winged carpenter ant reproductives will emerge inside a home. Carpenter ant swarms usually occur in the spring and are a sure sign that a colony is nesting somewhere inside the structure.

Winged carpenter ants can be distinguished from termites by their larger size and shape of their antennae, waist and wings.

Besides being objectionable by their presence, carpenter ants damage wood by hollowing it out for nesting. They excavate galleries in wood which have a smooth, sandpapered appearance. Wood which has been damaged by carpenter ants contains no mud-like material, as is the case with termites.

The extent and potential damage to a home depends on how many nests are actually present within the structure, and how long the infestation has been active. Although large carpenter ant colonies are capable of causing structural damage, the damage is not normally as serious as that from termites. In some cases, the damage may be relatively insignificant, but this can only be determined by locating and exposing the nest area.

Shredded fragments of wood called frass, similar in appearance to coarse sawdust, are ejected from the galleries through preexisting cracks or slits made by the ants. When such accumulations are found (typically containing dead ants and bits of insects which the carpenter ants have eaten), it's a good indication that a carpenter ant nest is nearby. Oftentimes, however, the excavated sawdust remains hidden behind a wall or in some other concealed area. Probing the wood with a screwdriver helps reveal the excavated galleries. Another technique for locating hidden nests is to tap along baseboards and other wood surfaces with the blunt end of a screwdriver, listening for the hollow sound of damaged wood. If a nest is nearby, carpenter ants often will respond by making a "rustling" sound within the nest, similar to the crinkling of cellophane.

Carpenter ants may establish nests in a number of different locations. It is important to realize that these locations can be either inside or outside the structure. Carpenter ants actually construct two different kinds of nests: parent colonies which, when mature, contain an egg-laying queen, brood and 2000 or more worker ants, and satellite colonies which may have large numbers of worker ants but no queen, eggs or young larvae. The carpenter ants inside a home may have originated from the parent colony or from one or more satellite nests. For example, the ants may be coming from the parent nest located outdoors in a tree stump, landscape timber or woodpile, or from one or more satellite nests hidden behind a wall in the kitchen or bathroom, or perhaps from wood dampened by a roof leak in the attic.

Carpenter ants nest in both moist and dry wood, but prefer wood which is moist. Consequently, the nests are more likely to be found in wood dampened by water leaks, such as around sinks, bathtubs, poorly sealed windows/ door frames, roof leaks and poorly flashed chimneys. Nests are especially common in moist, hollow spaces such as the wall void behind a dishwasher, or in a hollow porch column.

If outdoor nests are suspected, the homeowner should also inspect around the foundation of the building at night with a flashlight, especially around doors, weep holes and openings such as where utility pipes and wires enter the structure.

A number of steps can be taken by homeowners to reduce the potential for future carpenter ant problems:

For information on other types of ants, please select one of the following links: