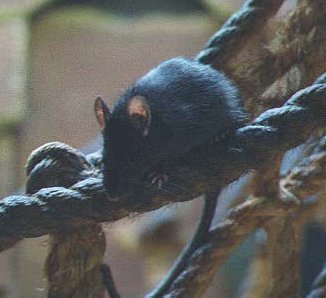 The black rat is economically important in terms of damaging food stores and as a transmitter of diseases like the bubonic plague, typhus, food poisoning, and trichinosis. Rat-borne diseases are thought to have taken more human lives in the last ten centuries than all the wars and revolutions ever fought. One subspecies, Rattus rattus brevicaudatus, has even caused famines. It consumes and destroys food stores and carries epidemics and diseases with its fleas, urine, and dirt. Black rats gnaw through insulation from electrical wires, sometimes causing fires. They also kill poultry, domestic livestock, and game birds. Through predation and competition, they have contributed to the endangerment or extinction of many species of wildlife.

The black rat is active at dusk and during the night. Having a history of dependence on man, living in human communities, and competing with man for food may have led, by natural selection, to changes in behavior related to coexistence with humans. Rattus rattus, for example, display avoidance of unfamiliar objects such as traps. Living in trees or roofs, R. rattus tend to flee upward. These do not burrow or swim but climb and nest above ground. They construct a loose, spherical nest of shredded vegetation, cloth, or other suitable material. 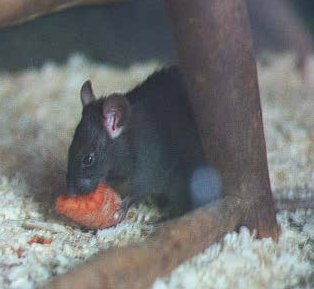 The black rat is a territorial, sociable animal, sometimes forming clans of up to sixty animals. Social groups usually contain a single dominant male and sometimes a linear male heirarchy. There are also two or three top females, subordinate to the males but dominant to the rest of the group. Females display more aggressive behavior than males. The feeding territory is defended against outsiders by biting, jumping, and standing on hind legs and hitting with the front paws. The infants in the group have immunity from aggression and can take food from the dominant adults.

Rattus rattus are omnivouous. They eat seeds, nuts, vegetables, fruits, insects, invertebrates, and other materials such as soap, paper, hides, and beeswax. Food may be carried back to the nest and stored.

In order for your rodent control program to be effective (as well as efficient) on a long term basis, all four basic steps should be implemented. 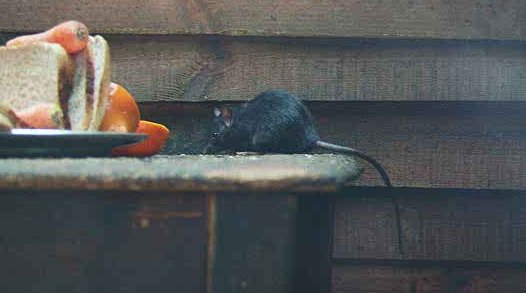 Inspection: There are ten signs we look for when conducting an initial (and follow-up) inspection: Droppings, tracks, gnaw marks, burrowing, runways, grease marks, urine stains, live or dead rodents, rodent sounds and rodent odors. A good inspection will give you a better idea of the size of the population and the routes taken by the rodents. As you will see in Population Reduction, you must intercept the rodents! Proper placements of baits, traps or live traps depend on proper inspection!

Sanitation: In order for a large population of rats to flourish, there has to be an abundance of food and water, as well as easy access to a cozy nesting site. By removing or reducing the factors that make any pest population abundant, we remove and reduce the pest. This is the backbone of integrated pest management! Sanitation does not imply that you live or work in a pig pen. Proper storage of possible rodent food, removal of undesirable vegetation (grass, weeds) and taking care of rubbish, lumber piles or old equipment are just a few examples of good sanitation practices. Homeowners must also realize that pet foods and wild bird feed are all tasty meals for rodents.† If rats have easy access to an abundance of dog food (especially at night when feeding is heaviest), they are less likely to be attracted to rodenticides or baited traps. 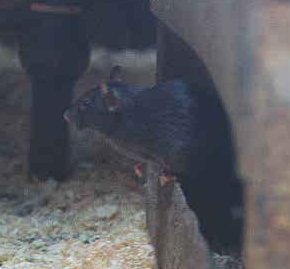 Exclusion: Controlling rats by making it impossible for them to enter structures is the best way to eliminate and control indoor populations. Although this is not always feasible, exclusion should not be ignored. It is not always possible to do extensive rodent proofing, but in many cases it can be accomplished with minimum effort. A building can be rodent proofed by eliminating all openings larger than 1/2 inch for rats. Even after this is done, rodents can slip through open doors and windows, gain access along plumbing and other utility lines or be transported indoors with merchandise! Exclusion also includes repairing doors and windows that do not operate properly or shut securely. Do not forget to inspect and repair air vents that may not be in sound working order.

Population Reduction: To quickly reduce the population of rats, we use traps and/or baits. In some situations, the use of toxic baits are not safe, legal or desired because of possible odors. When dealing with rats, we prefer a combination of traps and baits. We consider your building, children, pets, ability to deal with possible odors and dangers to non-target animals when choosing products to eliminate your rat problem.